Recording E. Guitars: Where to shoot at the cone

When recording electric guitars, moving the mic a bit may go a long way.

Download and listen to 20 different combinations of position & distance, and learn what to expect from each part of the cone.

Where´s the guitar tone you are looking for?

Obtaining a good guitar tone is a complex and rich subject, as there are many variables involved, from the musician him/herself, to the many different guitar models, pickups, stompboxes, amps, cabinets, speakers, mics, preamps, compressors… to name just a few.

However, in this article I want to focus on one important aspect: given a certain musician, amplifier, microphone and preamp, how do the position of the mic and distance from the cone affect the sound?

In other words, where to shoot at the cone?

The sound captured from each part of the speaker may vary a lot, especially when using close microphones.

In fact, when recording electric guitars it is common to place two or more different microphones at different parts of the cone, and then process and combine the signals to obtain the desired guitar tone.

Each position, microphone type and model will provide a different sound, so knowing what to expect from each part of the cone is very useful when making decisions about what mic(s) and places will yield the sound you´re after.

Here we´ll listen to 20 different combinations of position and distance, all recorded with the same performance, guitar amplifier, mic model and mic preamp. As we´ll hear, there are a lot of subtle nuances (some not so subtle) that you should take into account when recording electric guitars.

Placing 20 microphones in front of a speaker is not very practical, and for the purpose of this article, the mere position of some would have affected the sound captured by others.

So, the recording was divided in groups of four mics, and they were recorded five times, each at a different distance. These are the four points covered: 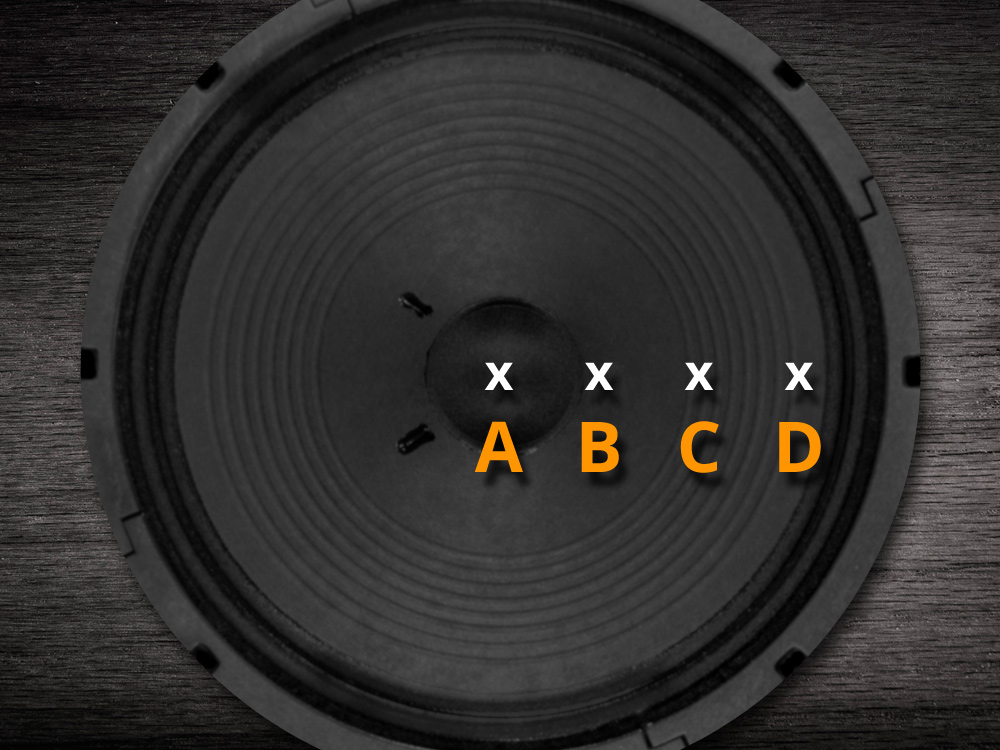 The chosen points A, B, C and D cover the front part of the cone, and although you could obtain different nuances with positions in between, they offer a good idea as to how the different parts of the cone sound.

So, in each pass the position of the mics didn´t change in respect to the cone axis, the only difference was the distance from it. These are the five different distances covered:

I wanted the article to focus on close miking. Farther than 30cm you´d probably use another type of microphone (condenser, ribbon), and you would also be looking for a different sound with it. 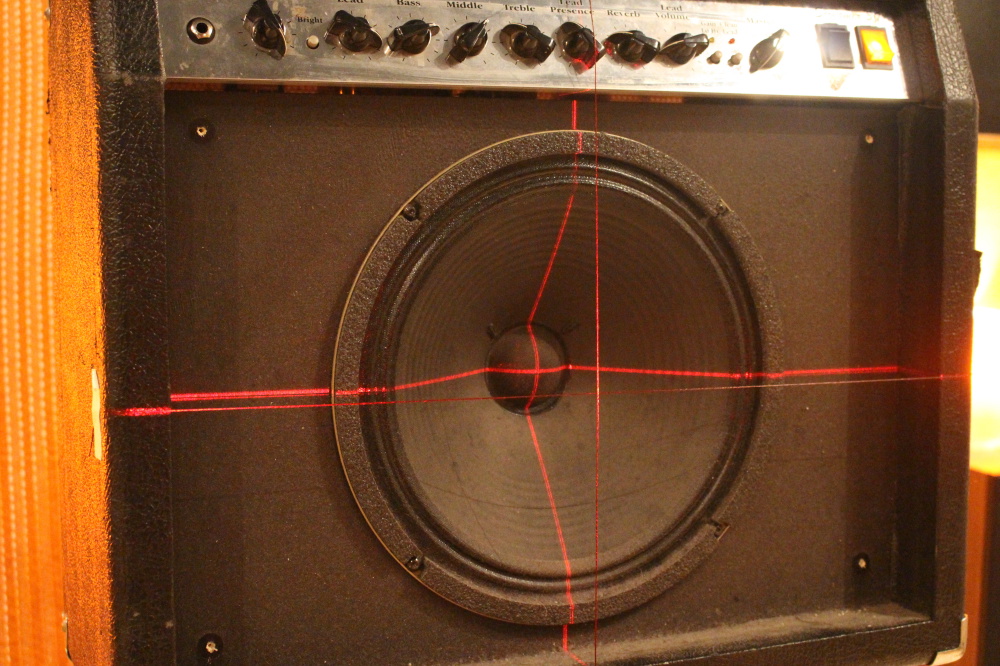 Some guides were placed in the amplifier to aid in the mic placement (the laser helped, and also looks cool)

The Shure SM57 was chosen because it´s a very well-known mic; if you are reading this, chances are you already own at least one 57! 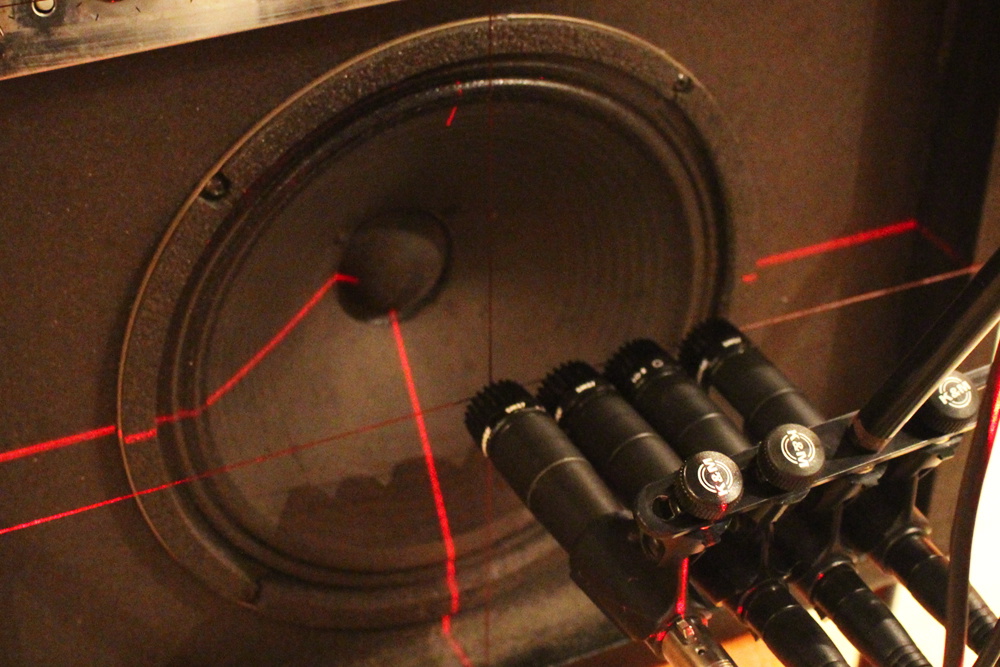 This is the position of the mics at distance '00'

To make exact comparisons between the different positions, the guitar performance was first played through the amp, and the signal from the guitar was recorded directly with a DI.

This direct signal was then used to feed the amp using a re-amp box (Palmer Daccapo), once for each distance. This is when the different audio files were recorded.

This way, each audio file is a different perspective of the very same performance, and the differences between them will come only from the different position of each microphone. 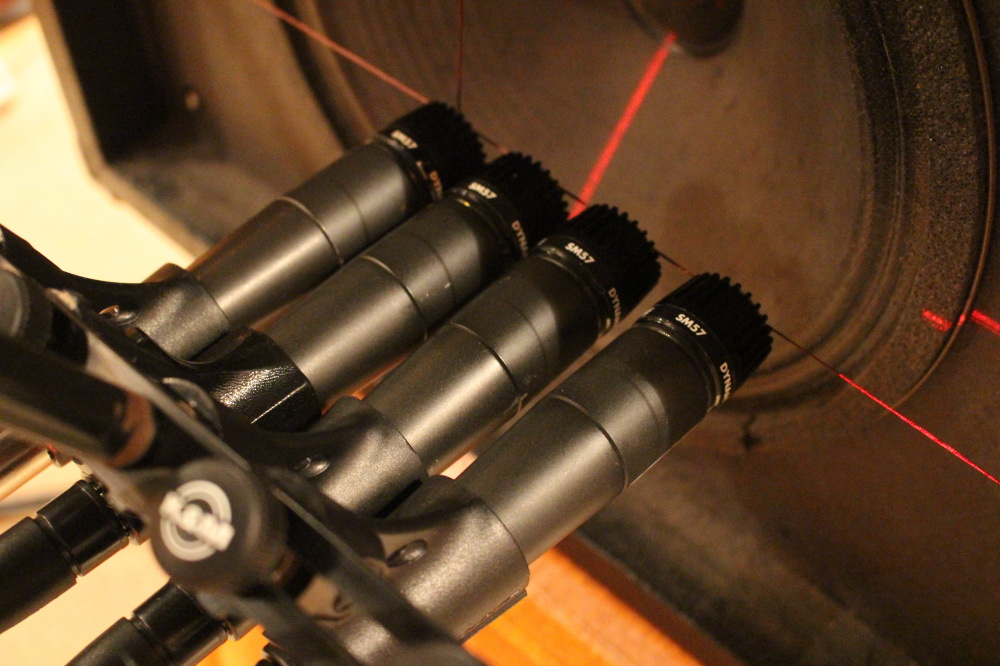 Detailed position of the outer mic (D) at distance '00'

This is because depending on the guitar tone you´re recording, as we will see, each zone may provide a different color. What works for a clean tone may not be so appropriate for something more distorted.

So, in total 60 different audio files are available. The first 20 are available to download within this article, and the next 40 will form part of a second installment.

Finally, the guitar amplifier used was an ENGL Screamer 50, with a 12" Celestion Vintage 30 speaker. The performances were played by Francisco Simón, and recorded to Pro Tools HD 9 via a Universal Audio 4-710d and a 96IO.

With all this said, there we go.

Note: these are Mp3 @320 audio files, and they show only the first seconds of the performance. You may download the complete 24bit/48kHz Wav files using the link at the beginning of the article.

As expected, the sound is brighter/crisper in the mics closer to the center of the cone (A, B), and gets 'warmer' while moving to the edge (C, D).

This is because the center of the cone is closer to the actual moving coil, so this part of the cone 'follows' its movement better. However, the outer part 'can´t follow' these movements so precisely, so the sound captured is a bit more 'rounder'.

The stiffness of the material of the cone affects this behavior, so different speakers will behave in subtly different ways, but generally, the center is brighter. If you want to know more about speaker construction, there´s an excellent article on the Sound on Sound website, which you can read here.

As you can see, at distance '00' the cone offers a lot of possibilities, and they may be extended further by changing the angle of the mics (it is common to try 45º instead of 90º).

Regarding the actual tone, mics A and B offer a rather present signal, while mics C and D offer a more 'relaxed' one. Each one may be more appropriate, depending on the arrangement and role of the part being recorded.

Let´s listen now to the rest of the audio files. Here is the complete matrix:

Note: The input/output gains in the UA 4-710d were not changed during the different passes, so the mics farther away presented less level than the nearer ones. This was corrected later using Clip Gain in Pro Tools, so all audio files have a similar loudness and thus comparisons between them are easier. 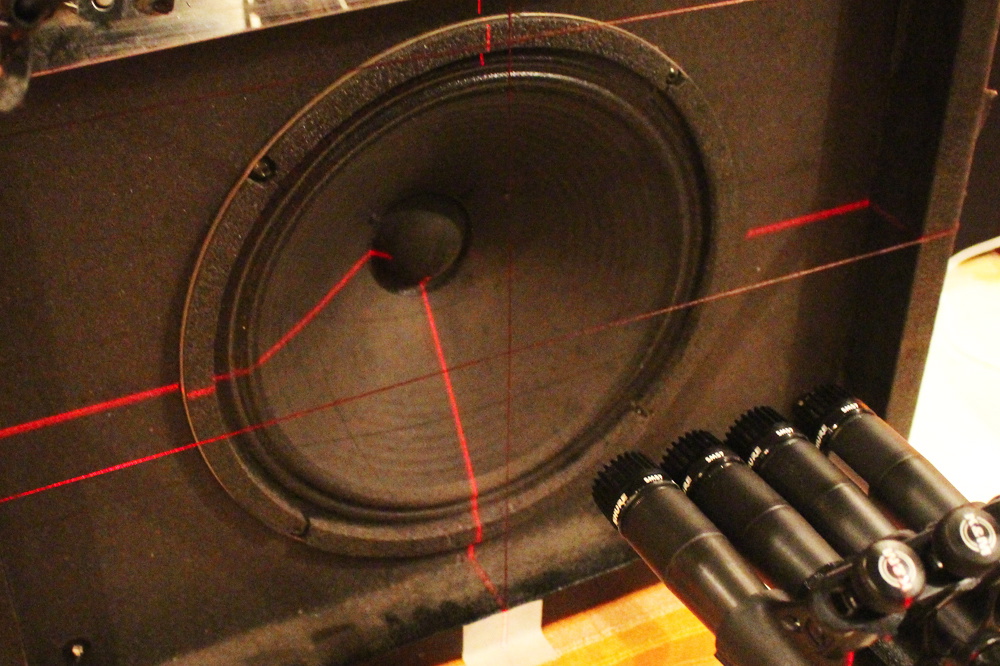 There are several ways of listening to the matrix.

If you choose one point, for example B, and listen to consecutive distances ('00', '05', '10', etc.), one of the first things you notice is the proximity effect in the closer mics.

This may be used to your advantage; for example, if you need a sound with more 'body' you could use a shorter distance, or you may avoid an excess of low-mids from the amp by moving the mic farther away.

Another important aspect is the spatial character of the sound. If you listen to positions A00 and A30, although they have a similar loudness, the perceived position of the guitar 'on the stage' varies subtlety. The A00 guitar seems to be closer than the A30, because the direct/reflected sound proportion is different, and also because a closer mic captures more details.

Or looking at it in a different way, if you are recording an arrangement that is intended to sit back in the mix, it´s better to record it with a microphone farther away. The sound will sit 'itself' in a more convenient place; easier than getting a super present sound with '00' positions, and then trying to push it back using EQ and or ambience/verb. 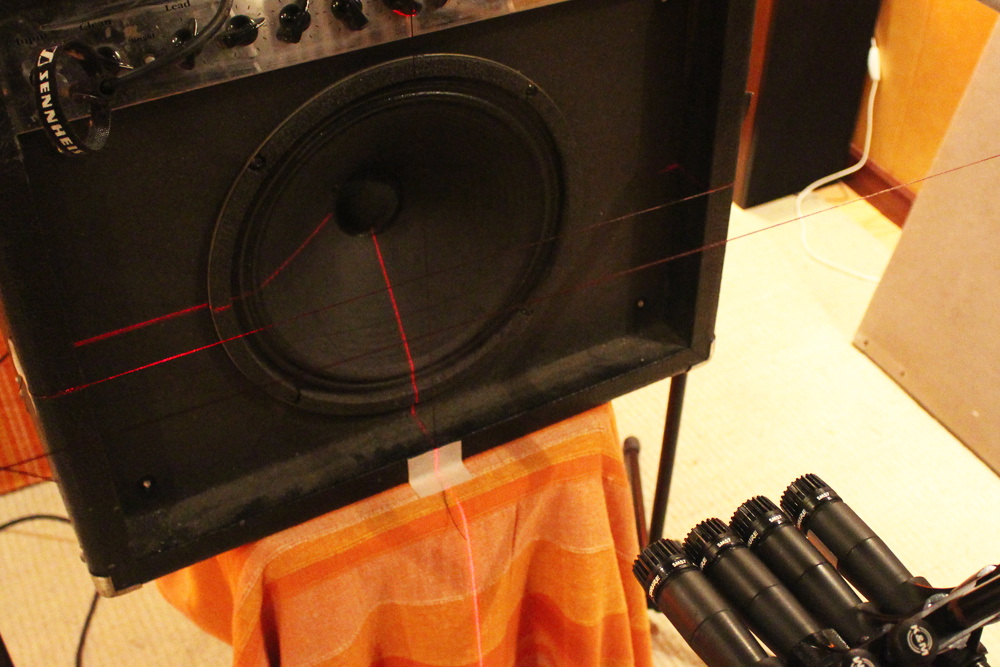 In fact, this aspect is relevant with any instrument. If you want more depth in your mixes, taking this into account will help. With good planning, each instrument will sit nicely in its own place, and later you´ll be able to further enhance the effect with other processors.

Finally, another noticeable aspect is that the differences between mics (A, B, C and D) are much less evident the farther they are away, as they are capturing a more 'general' sound of the whole cabinet, not a specific part of the cone.

Some browsers have problems with web pages containing a lot of audio files, so the Crunch and Lead audio files will be available in a different article: Recording Electric Guitars - Know The Cone - Part II.

Do you have any thoughts on this article? Join the Open Mic in the comments section!